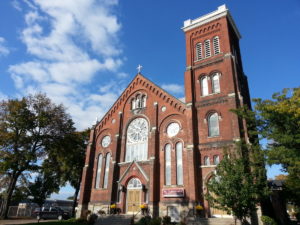 St Lawrence Church officially opened in November 1890 and has been serving the North End Community for over 127 years.

The Diocese of Hamilton is conducting viability studies on a number of Catholic churches in Hamilton.  Some of the Churches being: St. Mary’s, All Souls, St. Cyril’s, St. Ann’s, St. Anthony’s, St. Charles and St. Lawrence’s.  A Town Hall meeting regarding St. Lawrence’s  took place on February 7, 2018 in the Church Hall to hear the Diocese’s thoughts and recommendations, and to answer questions and hear comments and feedback.

The Town Hall was very well attended with about 200 parishioners and community members attending.  Monsignor Murray Kroetsch, the chancellor of the Diocese of Hamilton, and the Episcopal Director of Finance and Administration, Mr. Jim Long were introduced.  And a microphone was quickly supplied!

The Monsignor outlined the process to deal with the situation facing 8 parishes in the Hamilton Lower Centre, all with older buildings facing costly repairs and low parishioner numbers. In addition, there are not enough priests to serve all the parishes in the Diocese.

Step 1 of the process was a letter sent to the pastor.  A meeting with the pastor and a few parishioners was step 2.  At this meeting, the financials for the last 5 years were presented, and the “spiritual report” was reviewed – i.e. the attendance figures, baptisms, confirmations etc. Step 3 was to be the Town Hall meeting.

The Monsignor stated that, according to the reports, there is good preaching and a good spirit of hospitality at St. Lawrence Church.  The music is good but may need some tweaking.  Although outreach is good – Salvation Army and St. Vincent de Paul, volunteers are few.  There is a youth ministry, sacramental preparation and a children’s liturgy, and although numbers of parishioners went up, it is still a small parish, and often small parishes share a pastor.

There is also building problems that need to be addressed: an old coal room needs attention, there are some cracks of the plaster in some church walls, and the bell tower need some repairs.  Accessibility is a problem and is expensive to remediate.  Estimates are not all in, but $200-400,000 repairs are needed.

There were questions from the audience concerning increased housing development in the North End which will increase population, crowd-funding, and several others. Councilor Jason Farr, who was in attendance, spoke about housing development in the North End and confirmed that up to 2000 units would be built within the next 5 years, all being close to St. Lawrence Church.

In conclusion, the Monsignor recommended that the parish continue efforts to show movement in the right direction, such as increasing attendance and contacting the Pastoral Offices, whose staff can assist to develop youth activities, and improve the participation in the music program.  No decisions are being made at this time, but with all 8 parishes being reviewed, some of the possibilities discussed were; conducting fewer masses, sharing a pastor with another parish and even 2 parishes sharing one building.

Northend urban legend? True story? A bit of both?

How Will they Get Here 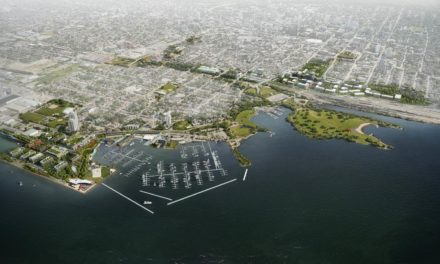 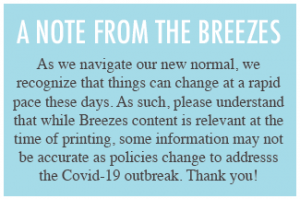